Skip to content
The ideology of gender: Polish struggles

The ideology of gender: Polish struggles

Grandfather sitting in an armchair. Smoking a pipe. The rest of the family scattered around the room. It’s 2014 and compilation of the first state-funded Primary School primer is in progress. This illustration undergoes alterations due to the intervention of an editorial member who deals with equality issues in this textbook. As a result the grandfather gets up from the armchair, loses his pipe, gets equipped with a watering can instead, and starts looking after plants. There’s also another man in the room – his adult son. This seemingly subtle change, however, then resulted in harsh criticism on part of some religious and conservative communities. They accused the editors of introducing ambivalent representations by allowing a same-sex romantic interpretation of the relationship between the two characters (Chmura-Rutkowska, 2015. Some organisations launched open petitions to the author of the primer not to ‘surrender’ to the new ‘ideologies’ whose aim is to ensure gender equality…

Continue reading about ‘the ideology of gender’…

The ideology of gender: Polish struggles

Grandfather sitting in an armchair. Smoking a pipe. The rest of the family scattered around the room. It’s 2014 and compilation of the first state-funded Primary School primer is in progress. This illustration undergoes alterations due to the intervention of an editorial member who deals with equality issues in this textbook. As a result the grandfather gets up from the armchair, loses his pipe, gets equipped with a watering can instead, and starts looking after plants. There’s also another man in the room – his adult son. This seemingly subtle change, however, then resulted in harsh criticism on part of some religious and conservative communities[i]. They accused the editors of introducing ambivalent representations by allowing a same-sex romantic interpretation of the relationship between the two characters (Chmura-Rutkowska, 2015[ii]). Some organisations launched open petitions to the author of the primer not to ‘surrender’ to the new ‘ideologies’ whose aim is to ensure gender equality[iii].

This situation seems symptomatic of the current equality-related state-of-affairs in Poland. On the one hand one notices substantial progress, on the other, opposition to this trend along with a backlash is palpable. The political popularity of Robert Biedroń, a former out MP and the current mayor of Słupsk, and of Anna Grodzka, the first openly transsexual Polish MP[iv], constitute powerful evidence of the progressive changes with regard to public perception of non-heteronormative identities in present-day Polish society. Yet, the fierce opposition to ratifying the European Union Convention on preventing and combating violence against women and domestic violence (the Istanbul Convention, CoE, 2011[v]) and lack of in-vitro fertilisation regulations (see below) seem to point to Poland going backwards when it comes to equality rights.

Possible measures that could be taken to address these issues are often instantly confronted with accusations of importing the ‘ideology of gender’ from the West. ‘Gender ideology’ is conventionally defined in the academy as “attitudes regarding the appropriate roles, rights, and responsibilities of women and men in society” (Kroska, 2007: 1867). Gender ideologies are society-specific but also within one society, one can be exposed to a number of different ones (Philips, 2014). In Poland the academic understanding of gender ideology sharply contrasts with what has been lately a political buzzword, namely, ideologia gender (‘the ideology of gender’). We intentionally use a prepositional phrase instead of the more usual nominal one to differentiate between the two. While the former is part of a sociological conceptual apparatus, the latter is a political construct that has recently been invented and successfully included in mainstream right-wing political discourse in Poland, and can be seen as a ‘moral panic’ (see e.g. Cohen, 1972) triggered by the Polish Catholic Church along with right-wing politicians.

Some of the most prominent Catholic Church representatives seem to see ‘gender’ as their main enemy. Gender here is viewed not as an analytical tool or concept but rather is an umbrella term encapsulating a number of negatively-loaded concepts and ideas – from the perspective of the Catholic Church, such as sexualisation of children, same-sex marriage, radical feminism, compulsory challenges to traditional gender roles, and paedophilia[vi]. This has had tremendous consequences, inter alia, for academia. Some university curricula featuring gender have been attacked by the Church, in tandem with right-wing politicians and activists[vii]. Some lecturers and researchers have cancelled lectures in fear for their safety[viii]. At the same time, a number of right-wing inclined academics and priests working within the academy have delivered, or attempted to do so, lectures and public talks demonising the idea of culture-sensitive and variable gender identity. The content of such talks is clearly expressed in their titles: Gender, jak się przed tym bronić (‘Gender, how to defend ourselves against it?’) or Gender – dewastacja człowieka i rodziny (‘Gender – destruction of the human and family’)[ix].

Several intellectuals (e.g. Chmura-Rutkowska, 2015) using the term ‘gender’ for genuinely research-related analytical purposes have pointed out how the phrase ‘ideology of gender’ has been successfully introduced into public and political discourse by the conservative powerful. This coinage was granted a quasi-secular stamp of approval once a parliamentary panel, whose sole ambition is to eradicate the ‘ideology of gender’ from the Polish public life, had been established (Parlamentarny Zespół “Stop ideologii gender [‘Parliamentary Panel “Stop the ideology of gender” ’][x]). The panel itself seems to have been a political fad[xi], on which a new right-wing party – Zjednoczona Prawica (‘United Right’) – attempted to build their ideological brand, and became an attention-seeker for the mainstream media. Unfortunately, the discourses they perpetuated have become solidified in public opinion, evident when a random person in the street is asked for the definition of ‘gender’ (something many TV programmes have managed to demonstrate). Very often the understanding of this concept revolves around a blurred idea of a blend of homosexuality, paedophilia and a perverse need to change children’s ‘natural’ gender roles (e.g. making boys wear skirts in kindergartens)[xii].  Over 2014-15, a vast number of newspaper articles and weekly magazine supplements[xiii] warning Polish society of the disastrous effects of passively incorporating ‘the ideology of gender’ have been published. Some politicians and academics have gone on to claim that this ideological concept should be deemed worse than Nazism or communism. The height of absurdity, some might claim, was reached when an ‘anti-gender’ on-line course was launched by one of the priests campaigning against the ‘ideology of gender’ and, perhaps predictably – another concept worthy of mention – homoideologia[xiv] (‘homoideology’).

Ironically, heated debates over gender have resulted in it being voted the most popular Polish word of 2013[xv]. Despite this popularity, however, as shown, there is little evidence that the society understands what gender means as a sociological concept. Numerous polls testify that the very consistent right-wing propaganda has been immensely successful. Regrettably, this has been met with little response on the part of the academic world: only a few publications in the press and – to the best of our knowledge – only two books on gender as a sociological concept (i.e. Środa, 2014; Kapela, 2014). 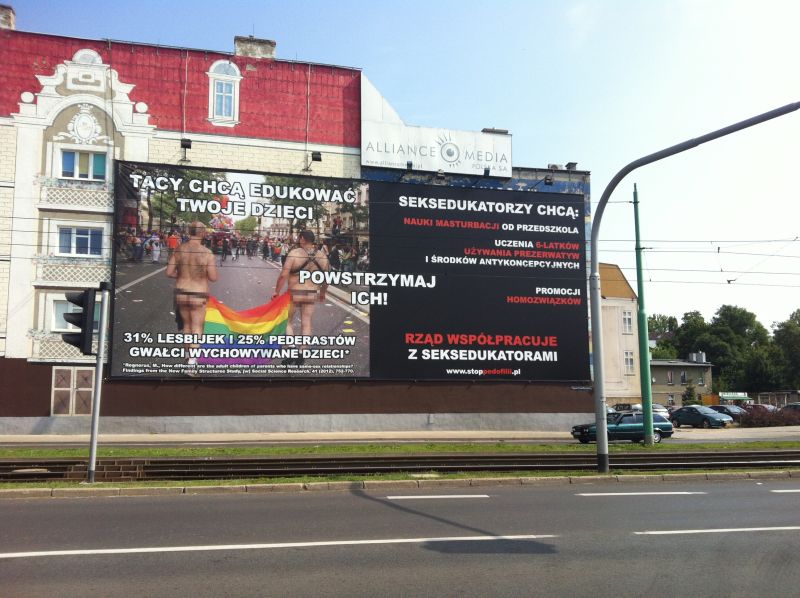 This is an extract from:

Philips, Susan U. 2014. ‘The power of gender ideologies in discourse’ , in: Susan Ehrlich, Miriam Meyerhoff and Janet Holmes (eds.), The Handbook of Language, Gender and Sexuality. Oxford: Wiley-Blackwell, 297–315.

[ii] This researcher has been a target of harsh criticism which has been verbalised, inter alia, in the articles mentioned in footnote 7.

[iv] And the only one in the world at the time.

[vi] Paedophilia is very often mentioned as associated with homosexuality, especially in the context of adoption by same-sex parents. The widely discredited ‘research’ by Mark Regnerus (2012) is often drawn on as a (quasi) argumentum ad verecundiam and tool of scientific grounding for and legitimisation of discrimination against lesbian and gay people.

[viii] Personal communication. No personal details are given here to protect our informants.

[xi] Its last meeting took place at the beginning of February 2015.

[xii] Ironically, the members of the panel also find it difficult to provide a clear and reasonable definition of the term. Frequently, to evoke the most negative associations, these politicians refer to Money’s failed sex reassignment experiment (Money and Ehrhardt, 1972), which has in fact been widely criticised by social scientists.

[xiii] With such titles as “Gender kontra rodzina” (‘Gender versus family’) (source: http://www.wsieci.pl/gender-kontra-rodzina-dodatek-specjalny-pnews-738.html) (accessed May 15 2015)

[xiv] More information about the course contents can be found here: http://stop-seksualizacji.pl (accessed May 15 2015).

[xv] The word itself has no equivalent in Polish and the descriptive equivalent (płeć społeczno-kulturowa; lit. ‘socio-cultural sex’) seems to be losing out to the incorporation of gender into the Polish language (Kiełkiewicz-Janowiak and Pawelczyk, 2014).